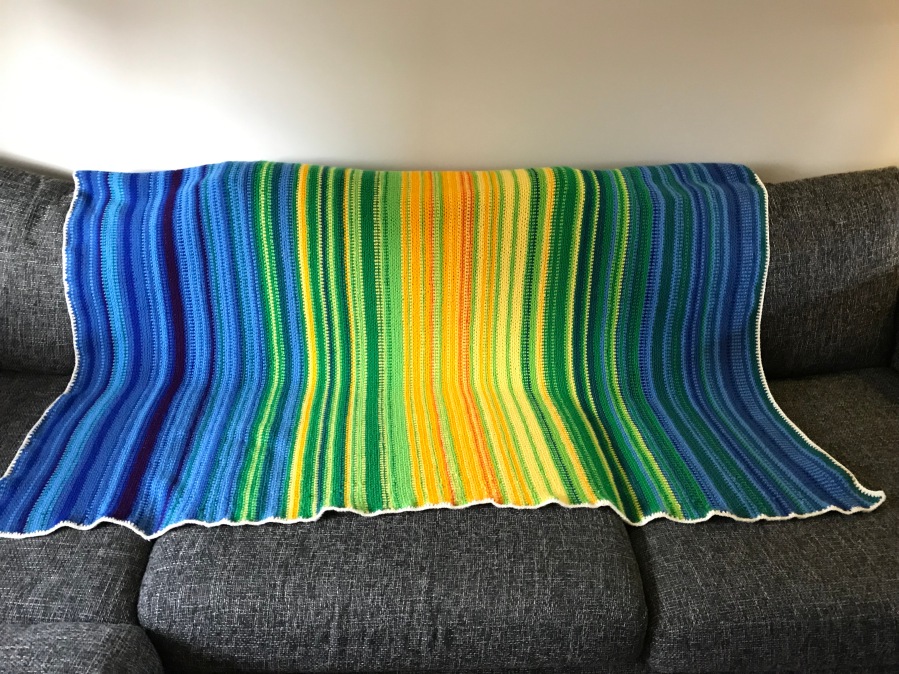 2018 was not my year!  Due to some big stuff happening in my personal life I found myself drifting away from blogging and this space was, sadly, left neglected.

Through the tough times I did continue my crafting, including my big, year long, project of making a temperature blanket.  You can see all of the information about the start of the project here – Temperature Blanket January.  There are also monthly updates for the beginning of the year if you wanted to explore the archives.

But to recap –  I chose to make my blanket using the midday temperature, as defined by the Met Office app on my phone, at my home location.  I had an alarm set for 12.01pm each day and at this point I checked the app and either recorded the temperature in my bullet journal or screenshot it to record when it was more convenient.  Then I crocheted one row per day using the temperature and the following scale.  These are all colours of Stylecraft Special DK yarn.

It turns out that the extremes of my scale were a bit optimistic! I didn’t end up using either the hottest two, nor the coldest two in the end and my blanket represents temperatures from -2 up to 26 degrees celsius.  It was both quite a bit colder and quite a lot hotter than that at points through the year but not at midday.  By choosing the middle of the day to record the temperature I gave it chance to warm up from the coldest bit of the day but not yet reach the dizzying highs of the summer time.  This is definitely something I would change the next time I do a blanket, for surely there will be a next time!

So do you want to see it all finished and read the final stats?!

The finished blanket measures 180cm x 132cm and has used just over 13.5 balls of yarn or 2.5 miles! The perfect size for sofa snuggles, in fact it has a child wrapped up in it most of the time that we are home.  I didn’t keep track of how many balls of each colour I used, obviously some are more prevalent than others, this count is based on the weight of the blanket.

I added a simple border of trebles (UK terminology) in cream and although the edges are still pretty wonky from where I haven’t kept a proper stitch count or turned with much care it does serve to tidy things up a bit.

I know each row took roughly around 15 minutes, leaving me plenty of time to fit other creative pursuits in to the year.  I didn’t work on it every day, preferring instead to do a couple of chunks a week but all of those 15 minutes add up!  Factoring in extra time for sewing in ends I think it comes in at around 95 hours or almost 4 days of work!

And all stretched out as a record of the year…. drumroll please…. it looks like……

I will not be making a temperature blanket in 2019. I have a sketch and plans and even a gauge swatch for how I would like to do it but even at my most optimistic calculations it will take at least twice as much time as this one has and I am choosing to prioritise that crafting time into other endeavours. But I will be keeping the plans safe for the future…